So, I’ve never done Inktober before – mainly because I’ve always been convinced that I’d never manage a full month of drawing every single day. Also, ink scares me.

I appreciate that might sound odd, but it’s all part of not wanting to be seen as a bit rubbish – you don’t get to edit what you produce before sharing it when you work in ink, unless it’s just by not sharing it at all. But I’ve realised, that doesn’t really get you anywhere and certainly won’t harden that artistic shell.

That’s why I decided I’d give it a go this year. I still don’t know whether I’ll manage all 31 days, but I’ll give it a go. Here are the first five days; usually, I’d try and justify why these aren’t very good but on this occasion, I think not. 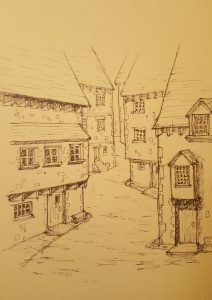 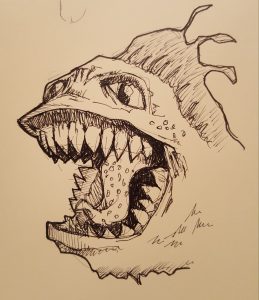 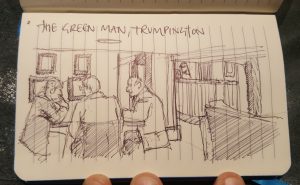 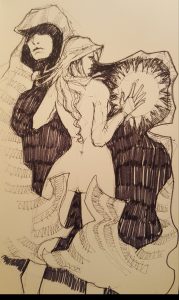 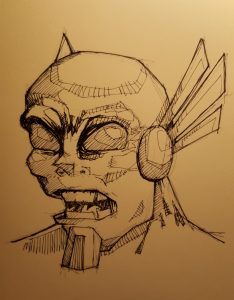 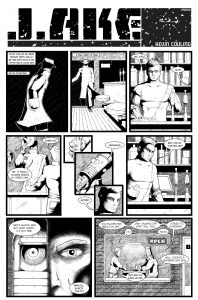 So, I figured I’d post progress on J.AKE, my short story (4 pages) about a cyborg who literally grows a conscience. I guess I could have waited until the page was finished but, frankly, I couldn’t contain myself… 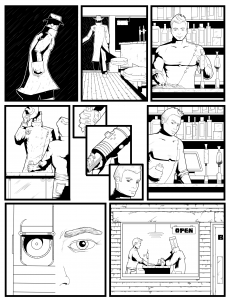 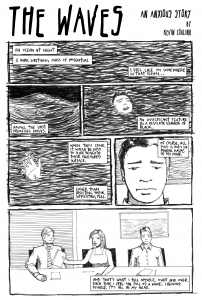 Fair enough. I’ve been reading sequential art (most people know that as comics – more on that in another post) for a pretty long time – let’s see, I’m 45 now and I reckon I started when I was maybe 10 or so; I’ll leave you to do the maths. Despite that, and the fact that I’ve always loved creating art, I’ve never managed to motivate myself to actually produce sequential stuff before now.

You’d be forgiven for thinking that that’s just damn lazy. You may well be right of course, but that’s not it – honest. The truth is that I’ve never thought my art was up to scratch and it doesn’t really matter how many times someone tells you that a piece is great, you (or at least, I) never thought was good enough.

I guess I held that comic art had to be as good as Zeck or Portacio or Lee or McFarlane to qualify because those were the guys that I really looked up to from when I read Secret Wars in the mid-80s onwards. Because, for me, it was all about the artwork – it didn’t matter too much if I only picked up a single issue of a comic and missed the arc, because I only picked up comics with artwork that made me desperate to be that good.

So, if you’re a vertical thinking kinda kid you might conclude that, now I’m about to release some sequential into the nasty old world of the internet, I must have got to a point where I think my art is good enough. Wrong, genius; I still think my art isn’t good enough, but what’s changed is that I don’t really care. At 45, lots of things look different to the way they did at 15, or 25 or even 35. Take it from me kids, if you want to make comics, don’t bother waiting until you’re good enough, ‘cause unless you’re pretty up your own arse, you’ll probably never think you are.

Without going into detail (I might do that later), there are a couple of people to give the proverbial nod to for me arriving at this understanding. First, Lizzie Boyle (@lizzieboylesays) – made me realise there was such a thing as small press comics in a café at Addenbrooks Hospital while we were working for Cambridge Uni. Second, the Awesome Comics Podcast guys (@theawesomepod): Vince “Help! The cats have locked me in” Hunt, Dan “Let that sink in” Butcher and Tony “Sex wee” Esmond. Yeah, they really moan about the state of comic cons, but they single-handedly do more for small press than anyone else I know of (admittedly, I don’t really know anyone, but y’know…) – thanks all.